Posted: October 26, 2017 Under: Uncategorized By admin No Comments

His breath stank and his body reeked of booze, smoke and body odor. He pulled me back away from my car. I saw the two other guys he had come in with, and I could see they were looking on in anticipation of what was about to come. The lead biker pulled me towards the dumpster by my hair. I realized they had put cardboard down on the pavement. He pushed me down onto the cardboard.

He ran his hand over my name tag and said, “Chloe, you’re in for a real treat tonight.”

All three of them laughed.

He looked at his cohorts and asked with a smirk on his face, “What is the best way to teach a young bitch like this some manners?”

One of the other guys answered, “Put it up her butt!”

The leader with a smug look of satisfaction on his face said, “Exactly, Now I want you two to hold her down, so I can pop her ass cherry. Don’t worry everyone gets a turn.” He chuckled.

I screamed, but I doubted anyone could hear me. Afterward, the man that had the bandana on took it off his greasy head and tied it around my mouth, so I couldn’t make any more noise. The smell, the oily texture and taste almost made me puke. Then as the men were bent over trying to pull my pants down, something jumped on the guy that had grabbed me. It was the wolf I had met earlier out at the gas pumps. It wrapped its jaws around the lead guy’s neck. The other two guys quit trying to get my pants down and turned their attention to the wolf. They tried to beat the large beast and pull it off their friend. The wolf snarled its teeth. I bit one of them and then the other.

While the bikers were distracted, I used the opportunity to run to my car, and I got in. I locked the doors, started the car and drove off. The three men were 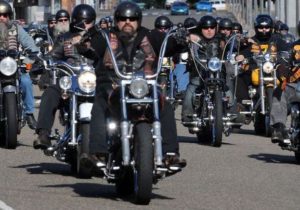 still occupied by the wolf, and it looked like the wolf was getting the best of them. As I came out from around the back of the building, I saw their motorcycles. I grazed them with the side of my car knocking them over. I didn’t want them to get away or worse yet to follow me. I drove down the street several blocks and called 911. I told them three men had tried to rape me, and they were still behind the convenience store. The dispatcher told me to watch for the police cars to pass, wait twenty minutes and then to head back towards the store. I waited and sure enough after about five minutes a police car passed with its sirens blaring and then another. They kept coming, and I counted four all together. I called my mom and told her to meet me at the store. She asked if something was wrong, and I told her I would explain when she got there.

I arrived, and the police had the men cuffed. I stayed a fair distance away, but even from a distance I could see they were all very bloody and had ripped clothing. The leader that had a neck injury was lying flat on his back in the grass. A police officer was applying pressure to the wound with a towel or some other cloth. Another police officer approached me. “I am Officer Hadley. Are you the one that called this in?”

I told him that my mom would be here any second, and that someone needed to tell her what was going on when she got here. He called another officer over and told him. I walked to his cruiser. We got in, and I told him what happened.

He asked, “Do you think it was some kind of wild dog that attacked them?”

He looked at me and said, “Chloe, we don’t have any wolves around here, so I will put big wild dog in the report. Is that ok?” He gave me a look which said wild dog was my story, and I should stick to it.

I replied it was.

After he was finished writing his report, he said, “Those guys belong to one of the most notorious biker gangs in the country. Two of them have existing warrants, and the other one is a registered sex offender. After a trip to the hospital, they will be locked up in the county jail. Now, I need to step out for a few minutes. Stay in the cruiser. I will come back shortly.”

I looked out of the cruiser. The EMTs had arrived, and they were attending to the bikers. My mom and my boss were also there. They were talking to the police officer that officer Hadley had called over. I waited as I felt secure in the police car. I kept thinking about the wolf. What would motivate a wild animal to save me? It didn’t make any sense because Officer Hadley said there were not any wolves around here.

Officer Hadley approached my mom and my boss. He talked to them for 10-15 minutes before walking back to the cruiser and getting in.

He said, “I told you about them being part of a biker gang. Unfortunately, this gang has a reputation for harassing witnesses whenever there is a court proceeding against one of its members. The man you described as the leader of that group is a high ranking member of that gang, so for your safety you will have a security detail assigned to your home and your work when you return. You’re under no obligation to do this, but for your safety when you go somewhere, it would be wise to inform the officer stationed outside our house.”