Posted: November 03, 2017 Under: Uncategorized By admin No Comments

He said, “Your biological mom was white.” He paused before continuing, “We believe you are the daughter of two of our tribe members that moved to Colorado shortly before their death. When we got news of their deaths, they had already been buried, and there was no sign of you anywhere.”

I sniffled, and I asked, “Can you tell me about my parents?”

He replied, “I can tell you a little about them, but the people back at our tribal home can tell you more because some of them would have known them first hand. I can’t stay long today. However, I will be in the area for the next week. I was sent here to extend to you an invitation to come visit the tribe. You could learn about your heritage and your parents.”

My mom asked, “Where is the tribal home?”

Jason replied, “Near Juneau, Alaska. We have our own small island that serves as our tribal home.”

I could tell that my mom wasn’t real fond of the location. She asked, “If she is part of your tribe, does that mean she could stay there?”

Jason looked at my mom and picking up on her concern, he replied, “She could if she wanted to, but it isn’t a one or the other choice. She is of the age where she can either accept membership into the tribe or reject it, but assuming she accepts it after her education about our ways, she would be free to leave. We have members located throughout the country. She could come back here and live with you. Understand, for our people, there is nothing more important than feeling a connection to their ancestors, and that is what we are offering Chloe.” 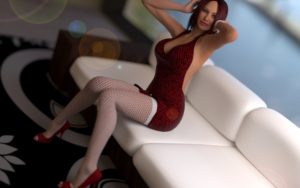 We talked for another 10 – 15 minutes before Jason said he had to leave. My mom invited him over to dinner Wednesday night. I showed him out the door, and I was elated at getting the chance to meet my relatives and learn about my parents. I watched him walk down the street and get into what looked like a rental and drive off. I was soaking, and I was wetter than I had ever been. Damn, we did nothing other than have a few minutes of polite conversation.

I made myself busy for a few minutes and my thoughts soon turned back to the wolf. I was heartbroken the wolf had disappeared. Then at about 6 PM my mom yelled for me to come downstairs. The wolf was pawing at the door. I let him in and I hugged him. The wolf followed me through the house wherever I went. The next couple of days were uneventful other than some missing food that neither I nor my mom could account for and the toilet seats that kept being left up. I couldn’t go back to work, so I sat around the house. Wednesday morning came, and I let the wolf out. I did some household chores, but when I went to let him back in he was gone. I assumed this was part of his routine now, and I suspected he would be back later tonight or tomorrow.

I helped my mom prepare dinner for Jason. At about 6 PM, a knock came at the door. I answered it as I was eager. I greeted him at the door and smiled big. He was carrying a bag. I felt strangely attracted to him. It was like an urge as the desire to be close to him was almost primal.

I took his hand and led him to the dining room. He looked shocked that I had taken his hand, but his facial gestures showed it was a pleasant surprise to him. My mom served us and then sat down to join us. We enjoyed some polite conversation. Jason even complimented my mom on how much he enjoyed her cooking. My mom blushed.

Jason said, “Chloe, I have something for you.” He pulled a gift wrapped box out of his bag and handed it to me.

I did, and it was a large figurine of a wolf. The statue looked to be made of crystal, and it looked expensive.

He said, “The wolf is the symbol of our tribe. It represents both freedom and companionship. The wolf is intelligent and self-reliant. Some even believe that the wolf is telepathic.”

I hugged him as it was the perfect excuse to feel his body up close to mine. I felt myself getting wet. Our embrace lasted longer than a typical hug, and my mom was giving me that look.

Just then gunshots rang out which was very unusual for my neighborhood.

My mom ran to the window and said, “My god! They are shooting at the officer guarding the house.”

Both Jason and I looked out the window. A group of three bikers were shooting at the police officer, and he was trying to run over them with his car.

Jason said, “We need to get out of the house now.” He directed us to the sliding glass door. He led us out into the yard, but instead of taking us out the fence door which led to the side of the house and would likely leave us out in the open and exposed, he walked us to the back of the fence. Jason pulled away three planks that were no longer attached by nails. It was like he knew they weren’t.