My girlfriend Riley was a normal girl, or so I thought. We had a pretty normal sex life when we dated, but that all changed when she moved in with me. Soon after she moved in, our sex life rapidly went downhill. Silly me, I thought the sex would get better when we didn’t have to sneak around to have it.

Just when I had about enough, something changed again. She started turning the sexual part of our relationship into some kind of show for her friends. She would frequently have a girlfriend that she knew over at night.

The first time it happened was when she had her girlfriend, Jess, over. Jess was a short redheaded girl that was a little over weight. She had milky white skin with freckles, but her most defining feature was her incredibly huge rack. We were all sitting in the living room when Riley asked, “Jess, you want to see something funny?” 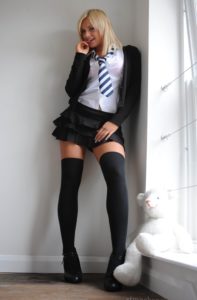 Riley said, “Rob is going to jack off for us.”

Riley motioned for me to get up from the chair and walk over to the couch where they were sitting. She asked, “Well, do you want to get off?”

I meekly nodded my head yes.

In a hateful voice full of venom, Riley said, “Look at how pathetic he is! He can’t even get that little thing up with two hot girls sitting here in front of him.”

Jess looked over at Riley with her mouth agape. I could tell Jess felt sorry for me. Jess started pulling her top off and exposing her massive tits. They were larger than DDs, but I have no idea what size they actually were.

Riley looked on in amazement as Jess took my cock and started stroking it for me with her hand. Jess said, “He just needs a little encouragement. Most guys do.”

I started getting hard almost immediately from the sight of Jess sitting there topless, and the sensation of her hand on my cock. I looked over at Riley as Jess was stroking my cock, and she had a look of smug satisfaction on her face.

Riley said, “Gross!” She pulled her panties and shorts back up.