I sell industrial equipment for a living. My job requires that I travel all across the country, so it is not unusual for me to be gone for a week or more at a time. I recently stayed at a hotel for a week, and the second day I was there I heard a young woman in the room next to me talking. It didn’t take me too long to figure out she was an escort. I had heard her talking to a client on the phone. I like hookers, but I try and avoid them when the company is footing the bill for the room as a lot of the ones you meet in the hotel bar are LEOs. However, I knew this one was the real deal from the conversation I had overheard, so I decided to try and make the most of this opportunity.

The plan was for me to come out of my room when I heard her come out of hers. I told myself like I had so many times before I wasn’t going to do anything with her, but I just had to see what she looked like. I caught her later that evening. She looked to be about 23-24 with brownish red hair. She was thin, and she was sporting an incredible rack for her frame. Easily a D. She looked too good to be a hooker. Then I did the oldest trick in the book. I lit up a cigarette even though I don’t normally smoke. Sure enough she wanted to bum a cigarette off me, so I gave her one.

While smoking with her, I started to chat her up, and see if I could get her story out of her. After we finished smoking, I brought her back to my room, and we continued our conversation. I started to drop hints that I knew she was an escort. She admitted she was and gave me the sad story of how she fell into a life of depravity. She started drinking at a young age, and by the time she graduated high school, she had a bit of a problem. She had gotten married at 21, but her husband had left her because she couldn’t keep herself away from the bars or employed. 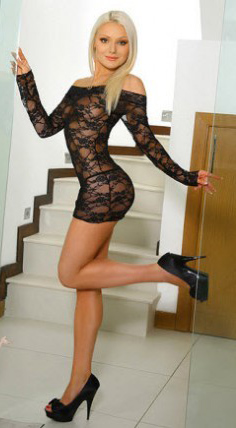 She was at a bar one night about a year prior broke and without a job. A guy in his forties offered her $300 for her time. She said what the hell and has been turning tricks ever since. She said she could hang out at the bars all she wanted, pick up a few clients and easily make a few thousand cash each week for just fucking and drinking.

I pulled $300 out of my wallet and laid it down on the table. Before I knew it she was on her knees with her tits out and began pulling my shorts down.

I thanked her. She left her phone number and took the $300. I slept well that night.

The next day as I was on my way back to the hotel I was curious if she was still in the room next door, so I sent her a text. She was and asked if I wanted her to come by to see me again. She told me she didn’t have any condoms though, so If I wanted to fuck, I’d have to pick some up. I stopped at the CVS that was close to the hotel and picked up a box of condoms.

I went into my room freshened up a bit and there was a knock on the door about twenty minutes later. She came in and without a word she pulled the sheets down on the bed. I began to get undressed and went to lie down on the bed. She headed to the bathroom, and when she came back out, I was naked on the bed waiting. She asked if I had the condoms, and I told her I did. I got up grabbed one out of the box, and got back onto the bed. She took off all of her clothes and climbed into the bed with me.

She began with some light play, pecking at my chest and neck while rubbing her tits against me. I wanted to fuck her so bad. I usually need more foreplay, but I was ready to go. She looked down at my hard cock and reached to grab the condom from my hand. She quickly opened it and put it on me.

She climbed right on top of me and I slid right in. She rode me for a good ten minutes trying to get me into it, but her riding was not the best. She climbs off and tells me to hit her doggy. I told her not yet and to turn around and ride me reverse cowgirl. She obliged. My view was wonderful, and I was enjoying every minute of it. I grabbed her ass and began to thrust into her as I guided her ass up and down. After enjoying that for a while, I decided to hit her doggy.